The Casco Bay Tummlers is a five piece Klezmer ensemble from Maine, now in its Bar Mitzvah year. The players are Danny

The Tummlers arrived in Dresden at sunrise, blinking from a sleepless flight. We shuttled downtown, stashed our bags at the main station and wandered into the old city, five ghosts in the drizzle, searching for breakfast. The river was a warm and liquid gold, while charred remains of war, in varying states of decay and reassembly, greeted us in silent witness. Old Dresden, in contrast with surrounding Soviet "power" architecture, is incredibly beautiful, silhouetted against the Elbe. Once known as the Jewelbox of

Europe, and until recently under East German rule, Dresden is finally rising from the rubble left by US bombs half a century ago. In the first hours of morning, the reconstruction was grinding into action.

I watched, fascinated, as masons sorted through large stone fragments, organizing them on long scaffolds. Others fit damaged pieces with inserts of new stone, like dentists performing fine inlays. Their surfaces remained unfinished and blackened from fire, a reminder of war. I wondered whether we could have stopped Hitler without destroying Dresden. Was there really no choice?

We met Nancy 3 at the station but no time for hugs. We hustled to the train and were soon making set

lists on our way to west Berlin. Jammed into a taxi, we stopped by the Wintergarten Varietee, to borrow a bass fiddle and bass drum from musicians we knew there. While Hayes and I caught up with old friends and new acts, Carl, Nancy and Danny went on to explore Potsdammer Platz. Once seat of the Reichstag, and still flaunting its Brandenburg Gate, Potsdammer Platz once lay just beyond the wall. It is now a beckoning gateway, with multi-colored cranes pitched in all directions, fabricating a city of commerce.

We taxied past Potsdammer Platz and deep into former East Berlin. Five years ago, the city still languished, gray and uninviting, in the shadow of the Wall. I was surprised to see avenues now dotted with cafe's and shops touting the latest fashions. Crumbling, bullet-ridden facades are spackled and cheerfully painted. If you are weary of mall culture, you would be refreshed by the lack of advertising in East Berlin. The young people we met retain a sweetness and a simplicity of living, different from ours.

The following day, before sound check, Nancy 3 was whisked away by an international conspiracy of carillon players to a bell tower

in Tiergarten Park. Overlooking the city, Nancy played her original Klezmer carillon-spiel. "Zev Eisenberg," in three Hassidic dance movements, rang out sweet and Jewish for all of Berlin.

If one could translate emotions produced by the memory of the Holocaust into architecture, it would be the Jewish Museum Berlin. Designed by Daniel Libeskind, it is shaped like a shattered Star of David, a lightening bolt or an angry scrawl. The building is bisected by horrific underground hallways. False perspective, tilting pavements and unparallel lines leave the viewer off-balance and emotionally without air. Slit views into tall, gaping air shafts where one only hears but cannot see children playing in the
neighborhood beyond, all evoke fear, isolation and a sense of being caught in a nightmare. Though the exhibit isn't up yet, the building alone is a sinister yet beautiful gestalt of dark times.

Our first concert was presented at a historical East Berlin landmark called Hackesches Hof. It's courtyards and venues are home a

thriving cultural night life. Site of the former Jewish quarter of Berlin, and situated near the still-standing facade of the Great Synagogue, this hof was an infamous umschlag platz, or yard used for the assembly of Jews for transport to the camps. The Hackesches Hof Theater, where we played, is committed to presenting Yiddish language music and theater.

Being in Berlin added poignancy to our Yiddish songs, especially "Friling," a cabaret song penned by Shmerke Kazcerginski and Abraham Brudno in the Vilnius Ghetto. What goes through the mind of a Klezmer musician encountering 21st century Germany? Playing Jewish music in this place where the unspeakable happened, yet the proverbial forty years have also flowed under the bridge? How do you reconcile the past with the present? The audience crowded around cafe tables and in the bleachers beyond. There were some older couples, and many young aficionados of Yiddish language and music, as well as members of a growing Jewish community. They greeted us with warmth and enthusiasm. We were quickly disarmed and feeling at home in our
music. We sang Yiddish Theater and life cycle songs, a Brecht-Weill tune to honor East Berlin, and a ghetto song. We also played medleys of instrumental Hassidic dances as well as selections from clarinet giants Nafthule Brandwein and Dave Tarras. We had two encores. 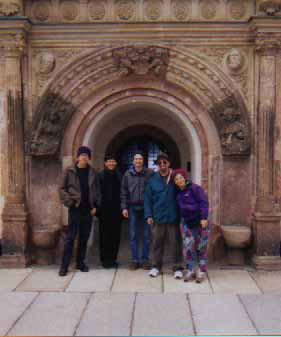 The following day we traveled by train to Chemnitz, former Karl Marx Stadt, near the Czech border. The main square in Chemnitz is a study in contrast: City Hall survived the bombing and is a testimony to ponderous Saxon architecture. Across the way, an ice-tray building with glass shops features Gap. A Romanesque church, its saintly statuary replaced during Communism by figures of workers in overalls, spans the Middle Ages into Social Realism. We were startled by a ferocious three story bust of Karl Marx, against a
backdrop of soviet utilitarian architecture and newly-sprouted western franchises. Just beyond Karl is a jeans store, festooned in American flags.

A local priest in Chemnitz started the Jewish Cultural Festival ten years ago. We were invited by a young German klezmer, Heiko Lehmann, who organizes the program with two musician colleagues. This year's festival began with the laying of the cornerstone a synagogue for the small Jewish population of Chemnitz. Locals attended festival events ranging from concerts to Yiddish
plays. Judging from photos Danny snapped of our audience at the Chemnitzer Cabaret, they were having a fine time and later demanded three encores. Except for a small minority, the mixed-age audience was not Jewish. However, they claim the Saxon dialect is close enough to be able to enjoy performances in MameLoshn.

An invited delegation of twenty Chemnitz-born Jews, survivors from all over the globe, descended on our little dressing room, cheerfully shaking hands and swapping business cards with the band. They were generous toward the city and its efforts to confront and heal old wounds. At least outwardly, they seemed eager to reconcile the past and move forward. Warm and familiar like family, they promised to try and bring the Tummlers to Strasbourg, Manchester and Tel Aviv!

It was returning to Portland that we returned to the Dresden issue . Our cab driver had been a U.S. airforce photographer in WW II. His job was flying reconnaissance missions over Dresden, documenting targets for the impending blitz. His answer to our moral query? "Had to stop Hitler. It was the only way to turn the Germans against him: by getting the people where it hurt most."

These words resonated sadly with me, especially after the kind reception and wonderful hospitality we had just experienced. I understood the driver's explanation, as a Jew. I'm shocked that dragging the neighbors out and shooting, deporting or depriving them of their basic rights wasn't enough to turn the Germans against Hitler. Still, as a citizen of the world and as an artist, I feel Dresden belonged not just to Germany but to all of Europe and its story. Its loss is all our loss.